Appreciate a lot on your mind over the past few days/weeks. Some suggestions from me below. They are ideas/concepts so a lot of detail would need further fleshing out and I would be more than happy to help, chat further with you and get involved. Google doc is here.

PS- Thanks for saving the DAO.

How do we achieve the above? Here we go…

1. Restructure tokenomics, essentially placing greater emphasis on long-term staking. I’ve seen proposals to kill wMEMO and I tend to agree. After the wMEMO transition, we lost the distinction between a long-term project supporter and a transient price speculator. We did get lots of liquidity though, which was nice.

In scrapping wMEMO I think we should not necessarily rush to kill the $TIME token. Killing the $TIME token will kill a lot of the brand equity that was built (yes… good AND bad). But that brand equity may be difficult to rebuild. Regardless, if we do scrap $TIME and create a new token I believe we need to overhaul our tokenomics. This should at a minimum include:

I don’t believe burning is appropriate for a number of reasons but mainly because capital has effectively been raised and we are through the bootstrapping phase. Token supply is now finite and earnings will begin to build, effectively placing stable upward pressure on price over time. We wont need artificial theatrics to achieve price increases.

2. How will revised staking work? I believe the length of time a token holder stakes should mean something. It currently does not. I think unlocking a greater share of earnings the longer someone stakes is a good way to incentivise this and encourage a longer-term staking mindset.

An important thing to include (and I think is fundamentally critical) is that retrospective snapshots should be taken in order to determine which holders have staked from the beginning and have never sold through this crisis. For these unique holders they should automatically be placed into the top tier or rewarded with some boost. This is both to recognise them and reward them for their loyal project support. We need to value these holders and reward them as they brought much needed stability and support to the DAO. 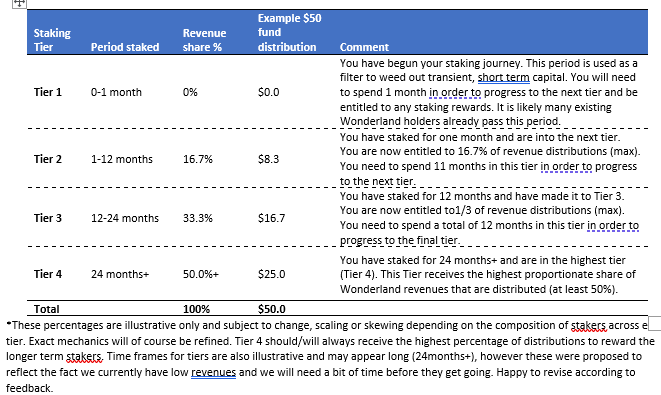 *These percentages are illustrative only and subject to change, scaling or skewing depending on the composition of stakers across each tier. Exact mechanics will of course be refined. Tier 4 should/will always receive the highest percentage of distributions to reward the longer term stakers. Time frames for tiers are also illustrative and may appear long (24months+), however these were proposed to reflect the fact we currently have low revenues and we will need a bit of time before they get going. Happy to revise according to feedback.

3. Scaled voting so whales can’t manipulate shitty outcomes for frogs. Everyone should have a voice, no matter what the size of their holding and everyone’s voice should carry some meaningful weight, no matter the size of their holding. In fairness it’s also reasonable for those that have more money invested and “at risk” to have a bit more clout in decisions. But this clout should not be so overwhelming that it puts them in a complete position of power. Further, the ability for transient/short term holders to vote should be removed and only staked holders from Tier 2 and above should be allowed to vote. This principle being that holders who have committed long term get to shape things. Not new mercenary capital trying to arb an outcome as we’ve just experienced. So how to structure this? There are a few ways but try to keep it as simple as possible. I think the idea of a scaled voting system so that votes are more evenly distributed would be a good approach. At a high level this would look something like: 1-100 $TIME is 1 vote, 101 to 200 is another vote, essentially scaling up to the whales. Meaning you have a whale with 10,000 $TIME able to have some weight to their vote, but not an overwhelming power of population vote. Special shouts to IAmTinyPanda for this suggestion.

4. The treasury shall not be used to pay out anyone that wants to exit. I think we may have cleared this hurdle but I’ve included this. This is quite important really in the short-medium term. Anyone who wants out should be selling at the prevailing market price. Fuck the whales and fuck any new capital that bought during the distress merely to wind us up and sell at par. Just as you bought at market, you now exit quietly at market. The treasury should be preserved at all costs such that it provides a robust and stable footing to commence this new phase. Eroding it ultimately erodes price for a long term holder. Even if the treasury In future if market price eclipses backed price we can revisit this.

5. Eliminate ability to leverage our token. Philosophically I did not want to propose this as I truly do believe in a laissez faire marketplace. However in my view it caused way too much damage relative to the benefits it was supposed to provide. Additionally, as the fund already employs a degree of leverage via the leveraged stablefarm strategy, I think we already have leverage inherent in the fund to enhance our returns. Lets please agree to forget leveraging up our tokens for a while ok?

6. Realistic governance- key matters only. We all want a say in things but I feel there needs to be a good balance as too much voting can be counterproductive and cost the fund dearly e.g. slowing down Dani’s/CIO’s ability to be agile, move quickly and potentially enter/exit investments when an opportunity presents or when the market changes rapidly. We don’t want Dani coming to us every time he needs to take a shit. Equally we want comfort there are good processes in place, investments are meeting our criteria and things are moving forward solidly with a good degree of transparency. I think the best way forward is to commit to establishing a good governance framework. It may involve establishing certain sub-committees or forums that vote on certain matters e.g. investments/investment strategy, staff nominations, marketing/PR and governance itself, are some areas that I believe are important. Work to be done on this but striking the right balance between transparency, process, independence and autonomy for management will be key to success.

7. Sifu replacement. Ultimately we need to find a replacement CIO. Dani will need to hand over the reigns eventually and refocus on doing what he does best across all his projects. The new CIO should be someone with a deep crypto background that understands DeFi intimately. Tradfi experience not essential but nice to have. Just needs to be intelligent, open, honest and maybe a small cheeky element of degen spark in them (we all have some degen in us). Dani we are in your hands to bring someone credible into this position.

Going forward and other stuff

Did not cover absolutely everything above but that’s what came to my mind first. Some other stuff that should be raised, discussed and eventually addressed….

8. Rebasing rewards, the staking pool and protocol-owned TIME. Would be good to work out what we do with the remnants of the Wonderland 1.0 space shuttle. To me its not really a question of ceasing the rebases. I think we should cease them as mentioned above we are no longer in bootstrapping phase. The question is around what we do with these “assets” - distribute or keep in back pocket for potential future capital raises, or burn but this is not preferable imo.

9. Status update for current investments- Liquid staking, BetswapGG and Cross The Ages. Just a brief and regular update on these projects as you would typically receive within a typical investment vehicle.

10. Generally just going back to being cool. I want to find a way to weave Dani’s cool pop culture ideas he used to talk about back into Wonderland (gaming, NFTs, metaverse, Superfarm, the “Supreme” brand of DeFi, etc). These were pretty exciting times and I want us to get back there and see some of this realised.

11. Some form of Strategic Asset Allocation (SAA) for the fund. Probably worth defining some risk/return categories for ourselves and then agreeing some allocation ranges for each of them. It will help to spread some risk across different investment opportunities and optimise our returns short and longer term.

12. Fund assets and the dashboard. Somewhat difficult to understand for a beginner and could be presented a little better with more use of charts/graphs. Consider removing TIME tokens as these probably don’t “count” if we need to sell assets as well. TBD.

13. Abracadabra merger. This will keep coming up, cause in theory it’s a good idea. I have actually mentioned it before. I think all three Dani projects are so integral to each other. The synergies are immense. I believe as the space matures mergers will gain more traction and become more prevalent as protocols consolidate. But the timing of a merger is important and terms for both projects need to be right. I don’t think the timing is right for us. For Abra there’s an obvious/huge benefit for the protocol owning its own liquidity. It comes at the expense of dilution for Spell holders though. Long term I think its worth it for them. For Wonderland holders I think the ability to earn solid returns from a decentralised lending protocol aiming to have its stablecoin be number 1 of defi is compelling. But unfortunately for me the Expecto Patronum proposal was weak for wMEMO holders. The implied price is too high for me in this market and its missing some other essential elements and safeguards I would want in exchange for our liquidity e.g. staking tiers like the above to prioritise wMEMO holders, ability to keep an independently managed allocation for VC investments over a large part of the treasury. I believe in time it should happen but now is probably not the right time/climate. Who knows, if they continue to operate emission-free, they may organically grow their own liquidity and not need to raise dilutive capital.

So that’s it from me. If you made it this far thanks for reading😊

Wow! That sure was a lot of thought. Need someone like you in the communications department pronto.

Thanks! If you could help circulate the proposal so others can read that would be great. I do my best in the investment management space, not so much comms/PR but thanks again! Hopefully you got some value out of it. Cheers.

@Mambo
Question: In your

table, do you feel that it might be better to calculate the Revenue Sharing percentage broken down into months, i.e.
1st Month 1.4%, 2nd Month 2.8% etc. (after the 1st month’s “weed out” period).

Great post and ideas, well thought out and well informed.

This is a good idea and I would be happy to incorporate this “linear” type progression into the tiers. I think the tiers are still quite important as they really incentivise a long term mind set which is what the fund would be needing in order to invest treasury into attractive seed opportunities. These investments often require multiple years to achieve the “10x”.

You have put a lot of effort into this and can articulate ideas like I never could or am qualified to. Easy to read and understand, just what this community needs. On board 100% with this.

Thank you. Really appreciate your comment.
If you are able to help circulate it and get it read by as many people that would be a really big help.
Thanks again and speak soon.