Before a WIP Proposal Number is issued and it becomes a vote, there needs to be a snapshot taken before the proposal becomes public, that way it will keep out the WHALES from buying in and manipulating the vote, if it could favour them

Don’t quote me on this, but I think that may already be how it’s done ?

The snapshot is usually taken before the snapshot vote is available. I would like to assume it is based on when the WIP comes out, but if not. Good point imo.

hell, the last one about winding wonderland down, gave the WHALES a 9 hour window to buy in, so i am not sure you are correct 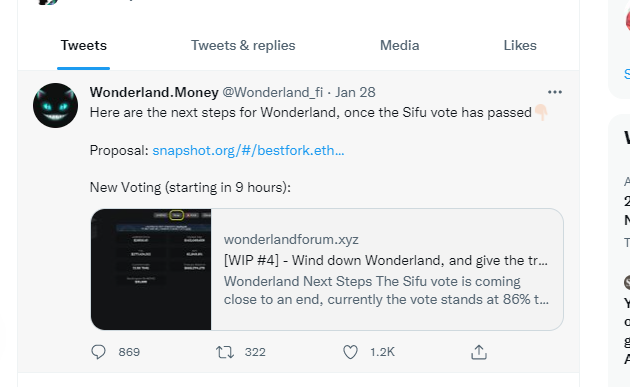 If fact, as you can see in the tweet, the snapshot link is already there, which I believe means the voting power snapshot has already been taken, they were just giving a 9h heads up, but any during that period would not have count toward that vote.

I guarantee you, people had inside information, i can show the transactions, for over 200 wMEMO hours before the snapshot. That is just the one guy who bought 12k, then almost immediately sold them

Ok, but your suggestion would not prevent people with inside information from acting.

Some people bought because we were under backing and expected to make a quick profit regardless.

may be, but, i can show you the top 2 votes (Wmemo 19.6k) only did those transactions over a couple of days, fook all since, now that is suspicious… bought, and sold within 2 days, voting or not?

did they have inside information? over $7m spent, and sold, um

Yeah, so I’ve heard, but at this point this is a totally different topic. One that I don’t know anything about