[WIP #4] - Wind down Wonderland, and give the treasury back to its holders

The Sifu vote is coming close to an end, currently the vote stands at 86% to remove Sifu. The team feels strongly that this is the best choice for the protocol and it needs to happen as a first step to move forward with Wonderland.

Despite this, we would like to already discuss points of action for once the vote has ended.

From the team perspective, these points of action are relatively clear.

A vote needs to be put in place whether to wind down Wonderland or not. What does this mean?

Winding down will mean giving every wMEMO holder back the funds from the treasury that they are entitled to and declare the OHM Fork experiment closed. We strongly believe that this would be the cleanest way of moving forward.

If the community does not want this and votes against this proposal, there is the option of handing over the project to the community.

This would definitely be a difficult step as it will be difficult to clearly identify an entity to give the control of the treasury to.

Due to this we think that if the proposal is voted against, and no counter proposal within 5 days is made by the community with relevant people who are willing to take over the multisig and willing to take on this challenge, we will still unwind the treasury. We don’t want anything to happen to users’ funds, and we would not feel confident to delegate the whole treasury to a non-structured replacement.

How will the voting of this new proposal work?

A snapshot vote will start exactly 1 hour after the Sifu proposal has finished. It will last for 48 hours, once these are complete we will either provide the UI for claiming, or initiate the 5 days period on which a new proposal will need to be submitted to the team. This will depend on the outcome of the vote, but we are already getting ready the claiming UI, as we strongly believe it is the best solution.

If the vote has passed, a UI will be put up within 4 days where every user will be able to connect their wallet on the Avalanche network.

Users will then be able to claim each of the assets that were in the treasury in relation to the amount of wMEMO he/she has. As an example, you will send your wMEMO to the contract, and receive the part of the treasury you are owed, with the different tokens that make it up( X amount of AVAX, X amount of MIM etc etc.)

Edit: Treasury will be paid back at backing price, and wMEMO held in the treasury is not a part of the distribution.

If you do not own wMEMO but hold MEMO or TIME, then you can wrap them here. 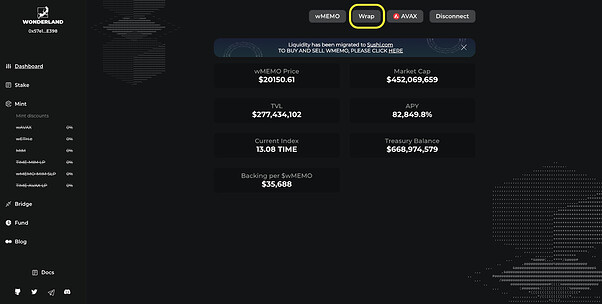 If you own wMEMO on other chains, you can easily bridge them towards AVAX here.

Once the dissolution vote is passed, we will be posting a how-to that will explain how to claim your share of treasury, to make sure that everyone feels completely comfortable in doing so.

The Snapshot link can be found here. Voting will start once the old vote is finished.

You gotta pay the people who got unfairly liquidated below 25k as you said.

Could there be an example or two to illustrate this for all frogs in a simple way for them to fully appreciate the formula and potential monetary return on such a proposal?

People will be voting emotively at a very low market value time…there needs to be a very simple and clear the choice means if you hold 0.2 wMEMO A) you could receive £x or B) the future could still be bright.

Any insight as to at what value would we be receiving the funds back? at the current wMEMO price or at the backing price? what´s the difference between this and just selling wMEMO?

i was close to being liquidated twice. Each time, I deleveraged (if possible) and sold all other assets I had (sold at losses) to pay back loan and paid 5x GAS price at the moment. I stared at my computer for hours while seeing the movement.

Would you say the same effort was made for people that got liquidated? Leverage comes with risks and people that take on leverage should understand that.

You voted that treasury manager out. This was being done in half out of his pocket. Not from Wonderland itself.

disagree, I bought more wMEMO after the dip after selling my other assets to lower liquidation price. Diamond hands get rewarded

Many frogs tried to deleverage however the sell off occurred too quickly in a matter of minutes.

What about the idea of merging with Abra? Is that still a possibility? Seems that could be a cleaner solution and could keep the treasury and its potential intact.

I think the project should continue onward with new management.

Selling at the backing price is still a loss for most of us.

Furthermore, if we are paid in anything other than a stable, it will be a race to sell, and none of us wants that.

Although I think the project should continue, if the vote is to dissolve it, I think everything should be converted to stables, and then split among all investors quadratically so that those of us who have held the longest get rewarded the most.

I’m fine with carrying on with the project but also fine with getting a refund.

However if the refund vote passes, I’m not tryna get paid in wmemo. Stable coins or eth/btc etc (something concrete).

I want me Investment back from when wMemo was at all time high. Can someone clarify we will get the actually money put in or just some of it?

We are gonna give the treasury funds to the whales that bought the dip, thx to th F…ing FUD !!! We must go on or the little ones of the community will be the loosers in this deal !!

How would this proposal work if your staking in Pendle? Can anyone answer that?

Exactly , the team was not doing a great job… we were way below WAY BELOW the backing price. Dani, you promised us man, please fulfill that promise , a lot of us who leavreged did it because we believed in the team buying back… A lot of us lost their life savings…

Or repay using a snapshot taken on Sunday 23rd January

If you repay wmemo holders with a recent snapshot, you will be paying the same whales that manipulated the price then bought after it dumped

I think what will happen is you where get back the part of the pie you put in. Might not be the full amount but it will be pretty close I would have thought

Can you read? It says trade in your wMEMO.

This cannot and will not happen.