I may be misunderstanding how Wonderland works, but I have staked and watched for months and am fairly confused at the value of wMEMO.

Once you convert your TIME to MEMO and then to wMEMO, or swap into wMEMO directly, your rebases are a ratio of wMEMO to MEMO.

Since the value of MEMO/TIME seems to have an inverse correlation to the stated APY, when you go to “cash out” you are not getting the value of wMEMO, but your conversion of wMEMO to MIM or AVAX or whatever else, based off of the price of TIME.

So I guess my question is how is the value of wMEMO related to MEMO?

Thanks. I get how my ratio of wMEMO to MEMO changes, but say wMEMO stays at $29,000 for the next 12 months and the price of TIME continues to go down. My rebase ratio improves, but as the price of TIME drops it erases the gains.

If I have 1 wMEMO now, I will still have 1 wMEMO a year from now, but it will be worth a large amount of MEMO.

You can go to sushi swap to exchange wMEMO for AVAX as an example, but I will always have 1 wMEMO and if it gets traded to AVAX it is based on the current price of wMEMO (of which I always have 1) the ratio of MEMO doesn’t come into play. I am only confused because I moved my wMEMO to my soft wallet, went to sushi swap to see how much AVAX I would get and the math was purely based on the quantity of wMEMO I have and the current price of wMEMO.

You aren’t really confused since that’s how it works.

What do you mean? Whare is a rebase rate in that story? 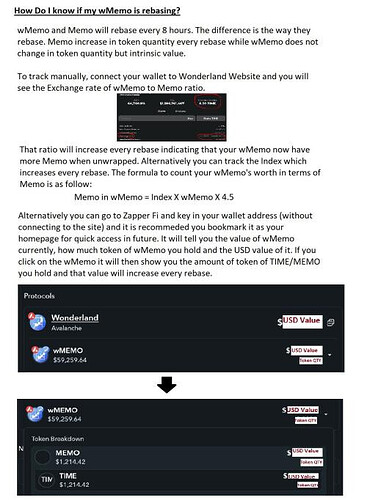 I know that rebase rate is inside wMemo. But the point is that in a year’s time I will receive a lot more than wMemo is actually worth when I decide to sell my wmemo. But now when I go to Sushiswap to see what I can get from my wMemo, the amount of MIM/AVAX that I would receive doesn’t include rebases. It just calculates the quantity of wMemo and the current wMemo price.

That was what I was trying to get at, the price of wMEMO is irrelevant. Your rebases are still an increase in MEMO/TIME. When you exchange the value is based on the price of TIME, not wMEMO which is why I do not understand the importance if a $38,000 wMEMO price for the rage quit, if TIME is trading at $220. wMEMO can go up exponentially but TIME does not directly correlate to wMEMO. Unless it is implied that via rage quit people will receive a quantity of TIME added to their wallet.

@mackaboogie The price of wMEMO is what you should be looking at. Rebases are a stock split. Which means, if supply goes up 9% every 5 days. So does the price of TIME. wMEMO however, would remain the same without market forces.

The rebase system was put in place for people to “keep up” with dillution coming from minting. Now that there is no minting, it’s pretty much irrelevant. It’s about what percentage of the market cap you have.

The fact is, you will not receive in a year a lot more than what wMEMO is because of rebases. The only reason you would is because of an extreme buy pressure that would moon the price.

The total supply of TIME is in the 2 millions right now. If we were to go back to ATH (10k), the market cap would become 20 billion, which would make it a top 10 coin and 6x our previous ATH MC. Taking wMEMO back to ATH however is a lot more realistic.

The reality is rebases never really mattered and they were a way to raised funds.

Thank you for the detailed answer, which you may assume would create even more questions, but that does satisfy much of my curiosity of how the underlying mechanism functions, appreciated.