UI change suggestion - price of TIME on the Stake page

Very basic suggestion…thanks for considering. Please put the price of TIME on the Staking page. One less click for anyone tracking their current position.

So what do we need to do who still are staking TIME? Do we unstake and migrate to sushi? What’s the process?

Wrap your MEMO so you can track the wMEMO price.

I’m still trying to understand: what’s the point of wMEMO? The rebase goes to MEMO (growing the number of MEMO) not wMEMO, right?

wMEMO has utility, including cross-chain. MEMO does not.

That said, every rebase, your wMEMO is worth more MEMO, so you still get that.

but the process to get the rebase profits is the unwraping the wmemo to memo and unstaking to get time. if time price drops then you will get less or none of the proffit as a result. Previous models has issues with the inflation so it was removed to prevent that, that is a understood move but new wmemo model is still the one that rises more questions than answers. Sure it has move versability and can be used crosschain, that is why most of othe invested and used borrow functions to increase there proffits but after it all collapsed everything went down to nothing and most of us who didnt borrowed still in loss while the wmemo price is way way less than it was when everyone bought it. Question: wMemo worth more MEMO with each rebase and after unwrapping it can be swapped and that is the way we get the proffit. Why not make the rebases and wrapping unwrapping less painfull (gas fees)? So far i am in loss not gains so just waiting to get the proffit.

You don’t have to unwrap. You can sell part of your wMEMO. If your wMEMO is worth 20 MEMO and you want to sell 10 MEMO, sell half of your wMEMO and the rest will keep “rebasing”.

Using wMEMO to buy/sell removes the need to wrap/unwrap, which makes it less painfull exactly like you are asking.

but the price of wmemo is the same and the quantity is same. how it will be more than it was before? 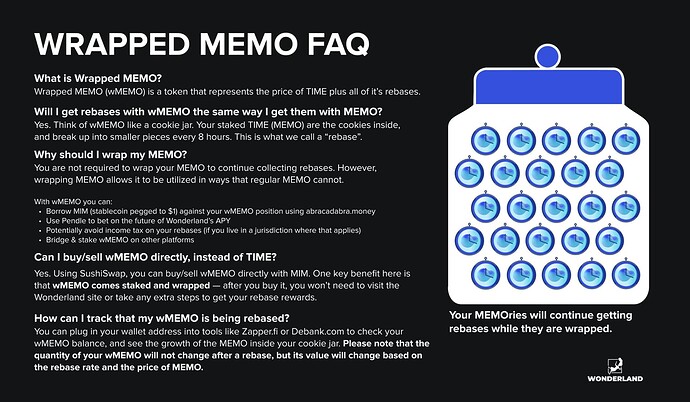 For more info, I suggest joining the Discord and ask in the #how-does-wonderland-work channel.