In the past days we have witnessed an attack on Wonderland using WIP#4 that occurred using block 10,181,614 as snapshot within the Avalanche network. This hastily written proposal was biased towards the “YES” outcome, most likely manipulated by certain players. Daniele Sestagali himself seems to ignore the likely “NO” outcome of the vote in his tweets, saying that it “is clear from the vote that the community is divided” before the vote ended. (1)

What is clear from the on-chain analysis of the data is that the proposal and subsequent votes were orchestrated to have a certain outcome by a group of whales. Analysing the history and on-chain data of these wallets showed that they bought $wMEMO conveniently right before the proposal to be included in the snapshot. (2)

However, the on-chain analysis proves that the majority of frogs DO NOT agree on the pathway that Daniele has proposed. Instead, it seems the community wants THEIR treasury properly managed and the continuation of the Wonderland DAO. (3) 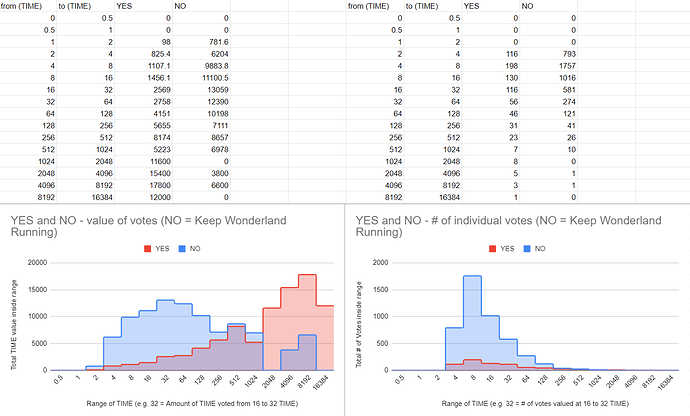 A new voting system is proposed in order to avoid undisciplined and unexpecting frogs from being rekt and becoming exposed to complex game theory utilised as a weapon by the slick arbitrageur whales to manipulate protocols and entire democracies, including on-chain bribery.

A new voting system is proposed to be implemented that gives more voting power to long term holders of $wMEMO instead of short term slick arbitrageurs and whales.

As a DAO a fair voting mechanism should be in the form of a quadratic voting system that uses a time weighted average (TWA) of the days $wMEMO (or MEMO/TIME) were held in the frog’s wallets.

The concept is simple, the longer you held your asset, the more weight your vote gets. A formula where $wMEMO uses f(x) where x represents the factor of the days held. This concept has been worked out by user @0xVonBismarck on twitter. (4) The same concept can also be used to fairly distribute the treasury according to the same principles should a future proposal decide to wind down the treasury, but for now, only the voting mechanism is proposed here.

The purpose of this proposal is to illuminate the path towards what is the best interest of the many frogs. We must focus on the trend and not the volatility. By voting for this proposal, a new voting mechanism will be established.

Yes, as a lot of earlier whales have cashed out quite a bit

Thank You for putting my thoughts into words!
I was thinking exactly the same thing: Votes need to be based on some function of number of tokens and time held.

I support this proposal or anything that prevents the manipulation of Wonderland as we’ve seen.

Whales and arbs are the biggest threat to the DAO.

if we don’t find a way to counterbalance their disproportionate power, the DAO is f’d

This is better than quadratic and in the best interest of early investors. Its in line with the vision of the project, so I hope it gets put forward.

What if you only just wrapped, but have held regular MEMO for a while?
I think it’s fair that anyone holding either MEMO or wMEMO should count the same.
Otherwise, totally support this.
How does this proposal make it to the snapshot?
How do we outvote the whales to implement it in the first place?

Thank you, please help spread this. As I wrote

As a DAO a fair voting mechanism should be in the form of a quadratic voting system that uses a time weighted average (TWA) of the days $wMEMO (or MEMO/TIME) were held in the frog’s wallets.

So, holding both MEMO or TIME will be accounted for. I can make a proposal to vote on this.

WIP5 need to be a proposal which addresses the following clause in WIP4:

“Due to this we think that if the proposal is voted against, and no counter proposal within 5 days is made by the community with relevant people who are willing to take over the multisig and willing to take on this challenge, we will still unwind the treasury. We don’t want anything to happen to users’ funds, and we would not feel confident to delegate the whole treasury to a non-structured replacement.”

Otherwise this time weighted voting mechanism won’t count for shit as there’ll be no DAO.

Great idea tho and I would support the proposal should there be one.

Thanks for the support. I really think this is the first thing that has to be established before moving onwards towards Wonderland 2.0. This clause should have inherently made it invalid in the first place. You cannot make a clause that you still go ahead with unwinding if you lose, that is not how a proposal and vote should work.

Totally agree. The only reason ever presented to wrap MEMO was to participate in planned revenue share – which has yet to happen.
So I have not wrapped my MEMO either thus far.
I don’t think we need to worry though – at least for voting, both wMEMO and MEMO are counted.