[THREAD] The vision ... And the future of Wonderland

THE VISION … AND THE FUTURE OF WONDERLAND

For months Daniele has been talking about his vision for his protocols.

On December 24th, Daniele tweeted a draft of his plan: 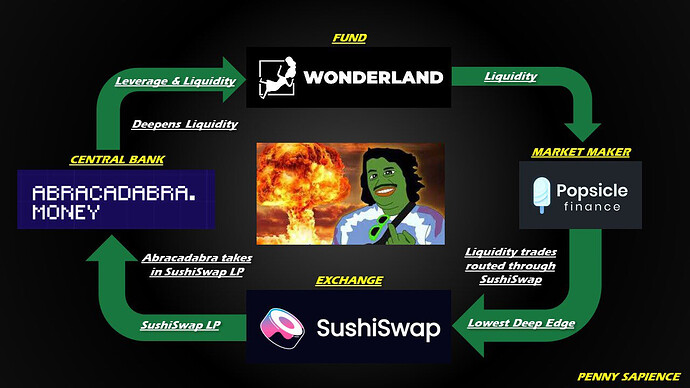 Since then, a lot of things have changed, but the vision remains.

After all the drama and the FUD, the ecosystem was broken and shaken up to its core, but the protocols are still standing.

In the last two AMAs, Daniele reiterate his intention to bring his vision to life

[AMA] Summary of AMA with Dani 02-MAY-2022 General Discussion

Wonderland AMA with Daniele Sesta - 02-MAY-2022 Soundcloud: https://wl-l.ink/AMA/Dani-05/02/22 Recap: [image] Full time legal team. Legal structure etc. “For the sake of all token holders” needs to be done for all projects, abra etc. [image] Unify, reach bigger goals. Become a corporation.  [image] Have offices, like a “real company”  [image] Find work for everyone that had issues with liquidation [image] Wants to “get out of the metaverse” as it is limiting our existence  [image] Sc…

Wonderland AMA #2 with Daniele Sesta - 21-MAY-2022 Soundcloud: Sorry for the delays folks! Here is the recap for AMA #2 Recap: [image] We are prepared for the bear market to aquire assets, been selling Avax, Eth, wBTC before and are ready for buying the dip. [image] Feeling that it is a good idea to start engagement of the treasury more directionally, as the assets become cheaper it becomes relatively good to look into it. At the end of the day we need to look at sort of an average pric…

The latest one went a bit more into details and laid out some options to make his vision happen or, if the communities choose to, go a different way.

Keep in mind that none of these options are actua proposals, they only serve as getting the discussions started.

An actual proposal will have to go through the governance process before any of these options move forward.

One token to rule them all

One token to rule them all AKA “the merger”, was the first option presented. Simplify the ecosystem by combining the protocols together.

[OPTION #1] One token to rule them all General Discussion

ONE TOKEN TO RULE THEM ALL [image] Why Merge ? On January 26th, the original merger proposal was submitted for the DAO’s consideration and talked about how the two protocols can work together. Merging the protocols would allow the DAOs and core teams to focus on a singular path forward by combining all efforts on achieving the protocol’s objective. Combining resources would make the protocol of giant of the industry. It would allow the potential synergy between both protocols to be stre…

Rebirth of the Ecosystem

A rebirth of the original vision. Each protocols remains independent, but complement each other to bring the vision to life.

[OPTION #2] The Rebirth of the Ecosystem General Discussion

THE REBIRTH OF THE ECOSYSTEM [image] Why the Ecosystem ? The ecosystem was the original vision presented to frogs. One could say it represents different type of frogs working together for the greater good. The essence of Frog Nation. Frogs helping other frogs. Keeping the protocols separate is also a more decentralized way to achieve the vision compared to the merger where everything would be centralized into one protocol. This aligns better with the core values of crypto & Web 3. Havin…

The protocols are going their separate ways, they may work together if the opportunity arise, but each one will focus on themselves and leave the big picture behind.

STATUS QUO [image] Why Status Quo ? The status quo option means that the community is not interested in merging with another protocol or don’t believe in any explicit collaboration. Each protocol remains independent and their only focus is their own success. There is no need to concern themselves with the bigger vision that the protocols were envisioned to be a part of. Known details These are pretty simple. Wonderland continue as is. Partnership with any protocol can come and go as re…

The Wonderland “experiment” is over, holders are given different options to exit and go on their own way.

WIND DOWN 2.0 [image] Credits to DgenFren - The Unmasking of Sifu Why Wind down ? If the community believes that the Wonderland “experiment” ran its course and it is time to pack up and go home, this would be the option for it. Wonderland would come to an end and the treasury would be distributed back to the holders. Different redemption options could be available like during the rage quit event. Of note, Daniele indicated he did not believe in this option and the community already v…

Let us know what your vision for Wonderland is ?

Special mention to Popsicle (ICE) who will be indirectly affected by this.

That’s a good question actually. Would need to see how Popsicle progresses, but technically, Wonderland could be one if that is the road we go towards.

Awesome work NalX, I like the drop down feature to read all the options. Looking forward for Dani to give us some more alpha and some numbers to work with.

Rebirth ok. But why need Pop-suck-le and Abraca Dumb Ra?

Want to do thing with other Dani project? Go buy fishing rod.

WL no need to be bait.

Better to see if SIFU can do SIFUCADABRA. Use other protocol for trade and liquidity 1 INCH, ROOK, many other ones with REAL TEAMS.

Never be rebirth until somehow Wen LIQ people are properly compensated. They always be around asking. One day they get lawyers. Then what? Wen Liq become court summons on Discord. You want dat?

oppose treasury funds to buy or merge $spell. Someone wants to use WL’s money to cash out their $spell

Its rebirth of the “ecosystem”.

What? That does not make sense!

Wonderland can be turned into a powerful, independent, functioning protocol with its own projects.

Needs to really truly get rid of the shackles placed on it by this Abracadabra.

Needs the SkyH and Sifu to get multi-sig along with TRUSTWORTHY independents!

I guess to make a good decision , for now , I have not enough information. We should keep in mind that not only WL is trying te establish DEFI - and all the pother initiatives if we try to lay a link to the world - it is WL and many other “countries” with their own ideas/ way of working/ interest of reaching the (probably same goal)… so when merging this would probably be the best option for now in case of alignement and strengthen this project. I guess there should be more info available about working together or merging , otherwise I am afraid there will be n upcoming situation which probably will result in a mill down … … so all out there can we join a meeting with popsicle, abracadabra … or is there already a sort of whitepaper … or have I missed to much the last weeks (business travel).

would really love to get response - either here or in an open discussion on discord.
cheers from Holland

We dont really have any details on any of these options. It is more a question of taking an early poll to see what the community feels like.

That being said, details are definitly important and would need to be fleshed out in a proposal.

I’m actually for the merger. One token to rule them all. But of course whenever the proposal for all this is, it needs to be properly thought out and written with details for everything. Second option is not bad too imo.

As “Rebirth of the Ecosystem” seems to be the most popular option, I provided some thoughts on how I see Wonderland thriving as the heart of the ecosystem.

[OPTION #2] The Rebirth of the Ecosystem 1. General Discussion

TLDR: Ecosystem is the way to go. If not the current one, other protocols to partner with or building our own. Why building an ecosystem for Wonderland is the way to go ? To make a reality of the vision that brought Wonderland to life, an ecosystem is required. The original narrative Wonderland on was built on the back of 3,3 Frogs, the treasury was bootstrapped with the “stake and collect your lambo in a year” mentality and the “fuck the suits” (FTS) narrative hit a soft spot for a lot…