Some people got liquidated after buying the dip (WARNING)

Myself included, I have talked to a handful of people that bought the dip when the price of wMemo hit 39k. Since the oracle operates with a delay in price (not stated anywhere), people that used leveraged (for the first time) to buy the dip got liquidated up to 24 minutes later. I tried contacting the abracadabra team and they know there is a flaw with the oracle. I posted a picture explaining what I mean. As an example, my last leverage was made 21.23 UTC+1. At 21.24 I get liquidated, even though my position on abracadabra showed I had a 10% margin. My liquidation price was 45k after my last leverage, which seemed fine since the price now was well above the 45k it was set to. If this is not getting scammed by a price delay, I don’t know what it is. Since we are a minority, this probably won’t go far. As the abracadabra team does not care, I thought I would post it here to warn other people to never buy a dip since the price on abracadabra does not follow the current price. It operates with a delay which essentially means that whenever you buy a dip, you might get liquidated because of said delay. Bullshit imo and not something I would call “frog nation”. This is the same way banks take advantage of people. I hope I atleast save some people in the future.

The dexscreenshot is of the wMemo/MIM pair from sushiswap, which the oracle follows (I checked the code). 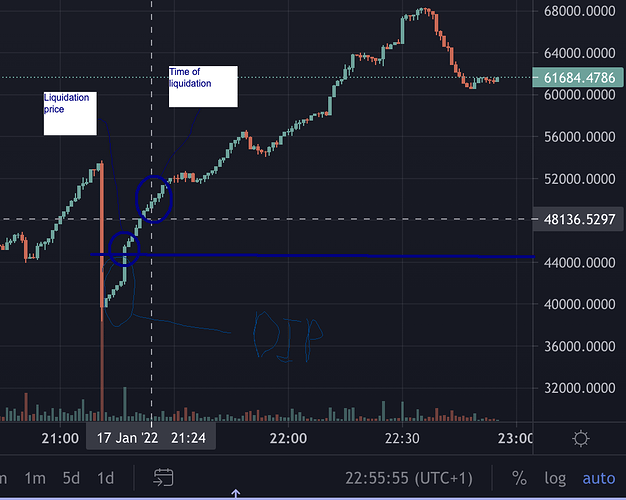 My question is, why would you put your liquidation price so high minutes after seeing it could go lower ? Tried to borrow as much as you could and repay after the priced had bounced back ?

Now, I get that based on your explanation it wasn’t totally your fault and there is a flaw in the system, but it just seems wild to me.

Anyway, hopefully the Abra team does something about it to prevent these things in the future.

Keep in mind that when I did the last leverage, the price was already 50k, which put me at 10%. I know it was a risk, but if the system had worked properly, I would be all fine. And had I failed, then I would only have myself to blame, be it wild or not. But taking peoples money like this and not doing anything about it is imo everything that Dani is against. I hope someone does something about this so it never happens to anyone in the future. Imagine timing the dip perfectly, only to get rekt by a flawed system… I am amazed how the contract even allowed me to leverage in the first place to force an instant liquidation… Never have I felt this scammed before lol

I’m sorry for your loss brother. Seems like you were ride or die with the project in the discord. Leverage is wild and after seeing what can happen I am going to stay away.

I’ve spoken to a handful of others as well who’ve experienced the same, and I’ve personally had the exact same happen that day— it’s a huge flaw within the whole system that’s made me and said others lose trust. I highly doubt too that they’d offer their oh-so-beloved frog nation

Thank you for your support! Deeply hurts to get punished by a flawed system. I would say stay away for now, at least until everything works properly…

Thank you for sharing your story as well… I wonder how many of us got hit by it.

If anyone want to contribute to a structured proposal, I can give you edit access

Wonderland Liquidation Rebate Proposal Consider 3 cases: CASE 1: Those liquidated for roughly 100% of collateral on “bounce”.. CASE 2: Those liquidate underneath the “backing price”CASE 3: All...

This is a nice idea. I just wish that either Daniel or Sifu could adress this, especially since Dani is promoting abracadabra so much (esp on his twitter profile)

Hi,
I’m really sorry you lost your money it must be very frustrating for you.
I’m not a fincancial advisor, soplease tae this with a pinch of salt.

It does seem to be your trading strategy was far too risky and didn’t account for any tolerance or redundancy in the sence of:

Personally I would not borrow or leverage money to reinvest, as you are at risk of losing your hard earnt asset. Leveraging ties you to a market positon and limits your options, when the price goes down. It is also a very short term strategy not something you can deploy indefinitely. This means you need to have an exit strategy.

If you own the asset you can sell it and buy it back at a lower price, without the emotional roller-coast of potentially losing everything. ve(3,3) might change that as you would lose other benefits from selling and leveraging or borrowing against such a benefitial asset makes no sense you could lose it.

Account for system glitches and other maket conditions, within your strategy. You will need redundancy with everything, good luck.

It seems like you did not read my post. I only leveraged AFTER we hit the all time low. Yet I still got liquidated, because the TWAP only registered us hitting the dip 24 minutes later. There was no delay, my last leverage was filled and completed on 21.23 (i borrowed more). On 21.24 I get liquidated because suddenly the price in the oracle goes from 48k to 45k even though the real time price was much higher than that. Heck, ill respond to every single point you made

Just got the confirmation from the developer of the oracle:

Hi,
Thanks for your response, I did read your post fully.
I also understand the mechanics behind how you managed to get liquidated after purchasing due to the Oracle delay. You treated wherever you swapped like a trading platform, where prices are real time. As t isn’t you didn’t have the time to pull out in case things went south. You just got liquidated after Oracle cought up.

I’m really sorry you had to experience this. 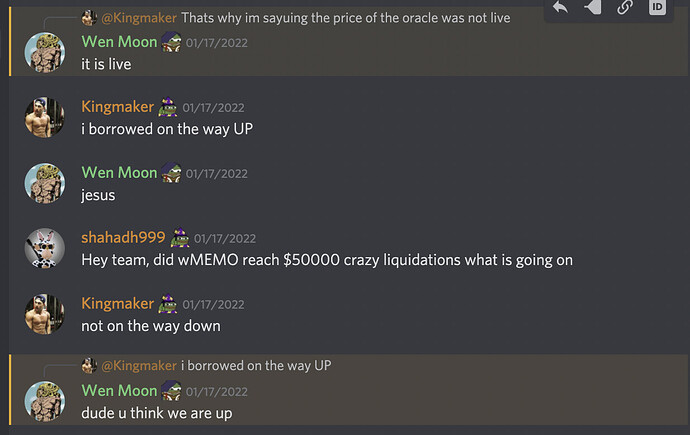 I totally understand what your saying in regards to a flaw, but leveraging during one of the biggest crashes we’ve ever had is just reckless…and a total gamble. I’m not familiar with this oracle that your referring to though? I’m assuming some kind of bot that says when its safe to borrow? I totally get wanting to buy at the lowest bottom and then borrow/leverage but again, this is a CRAZY gamble! Some of those drops were straight up violent…and fast! I deleveraged early and even now, im no where near leveraged where I was prior to the crash and sweating it every hour! Im sorry for your loss bro…rip.
PS - none of this was written to be a jerk or nasty.

It’s not a bot that says when it is safe to borrow. It is a bot that tracks the price and compares it to your liquidation price. I was not made aware that it works with a delay, heck even the abra team and mods said that it follows the live prices. I naively leveraged while the price was rising, the drop had already happened. I agree that I gambled, but I techinically “won” the gamble as the price never fell below my liquidation price again. Thank you for being so gentle and polite in your message, that is true frog spirit!