Name: [RFC] - a solution to mitigate the whales arbitrage at rebasement

Scope:
I have seen a video from “defi degen”, at the following video: he discussed the whales taking advantage of the rebasement and pumping pre rebasing and dumping afterwards. so since the yield in 1 rebasement is at 0.5974% and the trading fees on a dex is 0.3%, so for them to get buy in and sell, would out them actually at a loss if we assume the price stayed standstill. but ofc the price tend to go up as these whales tends to buy it up an hour or so ahead of time.
so as a solution, i propose to halvening the rebasement period from being each 8 hours to being each 4 hours. which will brings it down to 0.3% rebasement or so which will be unfeasible for them to arbitrage, and thanks for taking the time to read through.

Since an RFC is a “work in progress” Proposal, not all of these points need to be filled out from the beginning. They can be added over time as the RFC evolves into a mature Proposal.

This thread has been submitted as an RFC without a link to a previous discussion on the forum. Therefore it has been moved to the General Discussion section.

I think arbitrage is a bit misused in this context - it is rather a sort of sniping.

You have a 0.3% fee for swaps happening on Sushiswap. You have to trade MIM to wMemo and then wMemo back to MIM which makes it overall a bit under 0.6% in trading fee. That’s my thesis that specific behavior like the one you state doesn’t exist.

Do you have empirical evidence that there are really big wallets doing that? Or could there be the possibility that many small froggies are behaving like a big whale? You need to consider that also minting causes trading action around rebases.

If you can provide empirical evidence for this sniping I will vote yes but I doubt we will find it.

Already plenty of post on this. I suggest you look at those too.

@btcless we could just shot ourselves in the foot and have sifu rug pull us if you really want to tank the project. that would work a lot faster than adding fees just to fuck over whales sniping…which would also scare away a ton of potential investors.

I agree with not adding fees but i agree with OP in the fact that we need a way to prevent whales from manipulating the price because that also scares off investors. Take strongblock for example. You buy a node and you get returns from it. You cant sell the node. I think something like that is a good thing, but we’d need to find a way to make it work with this system.

@adamg6284 you mean a literal ponzie scheme where you cant pull your money out…antiwhale sentiment is not good. we need their money to make wonderland work. 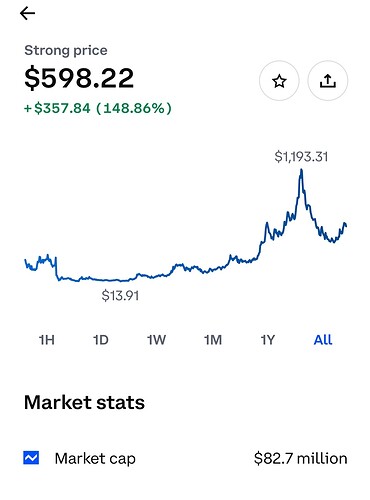 This is strongblocks timeline. Its been out since aug 2020 so its been pretty stable and its model is very similar to these rebase tokens.

You can call anything a ponzi including Wonderland and social security lol.

And strongblock gives you daily relatively stable returns and has been doing so for a while now.

@adamg6284 if you cant pull all your money out at any given time, its probably a ponzie scheme. if i were to be told i couldnt sell my time…i would never buy more. ever.

You might not but someone else would that wants a more stable return. Also, if you think about it, if you’re down from your initial investment, you’re sort of locked in anyway, aren’t you? I mean, look at it this way, you put in 20k and you make that back and more in a couple of months OR you put in 20k and now its down to like 15k and you have nothing to show for it except for a loss. It’s something to consider.

idk. ive had a hard enough time explaining rebases to people without them thinkning its a ponzie. the first thing they say is “you should see if you can pull all your money out. like just to see if you can.” and if i tell them “oh you definately CANT” i feel like that will sour and end the convo 100%

You and I both. It’s not for everyone. Those that want to jump in will do so. And like I showed you earlier, the timeline and results from strongblock are proof enough that it works. Also, we have investments in yield farming at like 50+ mil a year and the sports betting which will help grow wonderland even more. We’re bigger than strongblock and we can achieve bigger results but we need to implement stability safeguards. 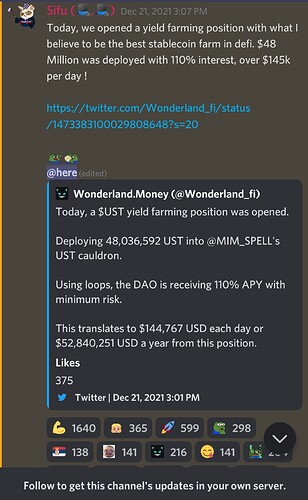 i don’t know man. whales don’t like locking their money in forever. i feel like an announcement like “you cant sell your time starting February” will cause all the whales to jump ship, along with maybe 50% of the small frogs because of the price drop that it’ll cause. without whale money we cant grow you know at least not to the heights we want you know? sorry my keyboard is fucked if theres a lot of typos

Makes sense. That could definitely happen but our current issue is that whales purposely tank the price right now to scoop up time cheap. In the stock market that would be illegal but crypto isn’t regulated.

i mean the whole thing is the whales are gonna jump back in to raise the price back up after January. so long term it doesnt matter what the whales do as long as they’re involved. scaring them away for good isn’t really a solution IMO and not letting whales play their stupid little unfair games will scare them away. its what they do. this locking in stuff is only really good for the paper handed

I guess. It doesn’t matter to me since im in this for the long term anyway. Only thing is your average investor will get spooked but thats just part of the game and not everyone will win.