REFUND everybody who got liquidated below the backing price

On January 17th we suffered a big $TIME and $wMEMO price crash. As I write this proposal $wMEMO is at 46k, losing 45% on 24 hours. We dipped real hard. While one could argue this could (and would) happen with a crypto asset, the point is that we dipped below the backing price.

That didn’t happen on January 17h. The price tanked hard and lots of people with liquidation prices well below the backing got liquidated, losing huge amounts of money.

My proposal here is that the protocol refunds every holder who (i) had liquidation price on Abracadabra below wMEMO backing price and (ii) got liquidated anyway.

While I get it and I feel bad everyone that got liquidated or had to pay back some MIM, people who understood the backing properly knew that the price could go below the backing and it would require the team to go and manually buy back.

The reason that they call it backing price and not risk free value is exactly for this.
Was this communicated properly ? Probably not.

That said, like you mentioned, people who leveraged took the risk and those that went too hard trusting a system they did not properly understand got burned.

This is why they say you should never invest more then you are willing to lose.

And that - unfortunately - is how we confirm that the backing price is just a made-up number.
There’s no auto buyback functionality implemented, so there’s nothing preventing it from dropping below the so-called backing price.

And if we are to refund anyone, may it be the early and persistent stakers, who - like me - have been staking TIME for over 2 months now, and have been seriously hit with what in my opinion is reckless communication. People are just running away as they think TIME is now gone and wMEMO came to replace TIME/MEMO.

There’s not even a BUY TIME shortcut in the website anymore. How exactly do we expect the price to go up? This is forcing the wrapping down our throats, and honestly this is no different from what the clowns from JADE have done. It’s just ‘nicer’, but the result is the same: we’re all losing money over an arbitrary decision taken overnight by the admins.

I really hope they reconsider this whole “focus shift” thing.

Yeah man, I mean what’s the difference between people who did not leverage and those who degened into double-digit leverage. This benefits those who took stupid stupid stupid risk and didn’t follow the first rule of investing… .never invest more than you can afford to lose.

why should the non-leveraged people be punished for not taking mad risks?
Plus if they refund the leveraged traders most likely those will sell as soon as they receive the compensation. That would really put the price in the Sh**ter

I don’t see the team agreeing to this as it will mostly add to the noteriety of the project, but I agree with the sentiment.

Secondly, if the treasurer who is held in such high regard got liquidated, how did the rest of us ever stand a chance? It was my decision to leverage and I made sure my liquidation price was lower than Sifu given their knowledge far outweighs mine.

Makes me really think to the skills of management if they allow this to happen to their own bags??

The price is back above backing. It just took a little time to get it there. That is to be expected.

Sorry for those who got liquidated. I have seen how the backing works out with lesser projects, so I knew it would never be a wall of buying.

I lost 6.4 wMEMO, almost everything i got. I really believe in Danielle and his team and Wonderland as VC project. I was holder for like 3 months because I trust. I just want to ask for a partial refund to try to start again with something.

Maybe can be wMEMO that you can claim every month or something like that to avoid massive sell’s again.

Probable the people that said no to this proposal are these who don’t believe, they sell before, wait to the massacre and then buy again. I really think these are no the loyal frogs that this project are looking for.

Over Twenty different posts have been put up, about Taxing sellers, and rewarding long term staker’s and none of them have ever got to the point of voting, It has never mattered how long you have staked for only how much. If they are giving money away to people it had better be evenly and to everyone. I didn’t get liquidated, and now they are talking about shutting off the rebase to protect the price. So lose, lose, lose for me because I didn’t over leverage?

I feel your pain… lost a similar amount…

I dont expect reimbursement… But if Wonderland was the liquidator, I would be very appreciative of a rebate…

My largest account had about 3.5 Memo… thing was, price fell so fast that that one wasnt liquidated at first… It was repaid on the “bounce” and I was left with 0.02% of initial amount…

To be fair, I am aware everything is an experiment… and I took on some additional risk for potential additional gains… …getting REKT is part of DeFi…
…I guess it just hurts that much more bc I ate it… but it feels unfairly cruel if Wonderland was the one who liquidated my entire bag on the “bounce”… and they got 12%… and Abra got 1+%… and they left me with 0.02%…

…computer code cant throw a bone… but Frog Nation can !

It’s understood that the treasury buyback is manual. Yet Sifu stated clearly that he and Dani wouldn’t miss a cascade past the backing price. 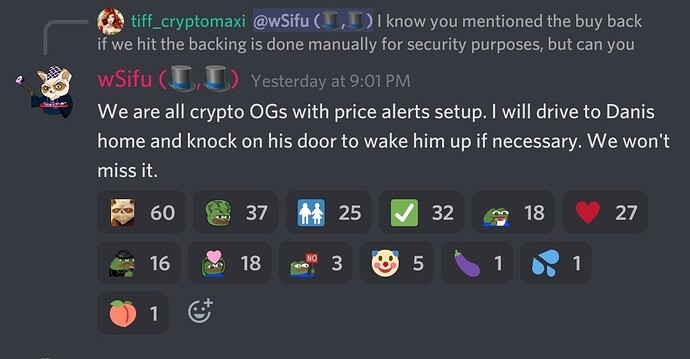 This implies that the multi-sig would be done in a timely fashion. Otherwise the buyback could take its sweet time returning to backing price. What’s the functional use of a backing price if it doesn’t prevent a sizeable drop? But the real issue here, that I don’t often see discussed, is that there should have been a mechanism in place to postpone liquidations until the backing price was restored. Then business could continue as usual when it comes to risks and leverage. That is the real issue. If it’s a liquidation bot question, modify the code to take into account a drop below the backing price.

Or, let us repay MIM that we borrowed and get back our wMEMO. I believe many people have funds ready but not able to make the payment cause AVAX congested. Not suggesting a free compensation, just a potential chance to reduce partial of the loses, if its technically feasible.

You could also quote his messages that says it can go below backing if it crashes faster than they can buy, but people are using this screenshot because it fits their narrative.

Postponing liquidation would have been an Abra thing. Some people were flagged for liquidation and didnt get liquidated because the price bounced back.

With what we had seen with OHM two days ago, anyone who thought we were safe just doesnt get it.

Also, I would assume people would also want to refund those that had to repay their loan with almost their full bag to avoid being liquidated? Yet no one is talking about them, why ? I know some tried and couldnt do it do to Avalanche being backed up. This also isnt anything knew and was to be expected in an event like this.

Now I will give you that the communication is horrible in this project, but everyone who understood what the backing was knew it could and most likely would go under. Hell, even JADE understood what it was.

People have too much faith in the team. This is a good wake up call that they are only men and can’t control everyrthing.

There is an ongoing discussion about repaying liquidations, please continue the discussion there:

Arguments against? Sifu stated multiple times they would manually deploy treasury if it ever reached backing. It went below backing for a significant period of time and significant depth. It was not a single massive red candle that could not be protected against, but rather multiple large liquidations separated by time. The ONLY way for Daniele and the devs of the whole frog nation ecosystem to regain the lost trust is to do what this proposal is asking.