As we are in the final hours of the vote as to whether Wonderland continues or gets dissolved, I believe it to be wise to begin thinking of ways to sustain growth. This value in this project, and our investment in Wonderland has always been in the revenue share of profits earned through investments made by the treasury.

Anything can happen in the coming hours, but for now it seems that Wonderland will continue. We will need to decide on many things in the coming days and I anticipate that a NO vote will probably result in increased price volatility as people who may have purchased in an effort to capitalize on arbitrage, so there should be something in place that works as a stabilizing force for price action that will also work as a long term benefit to the protocol.

I propose that we utilize treasury holdings of wMemo to incentivize long term holding of the wMemo token.

The bonuses are sustainable because after you qualify, your bonus revenue share will come from a portion of the treasury’s wMemo holdings that will then be allocated to you. YOU WILL NOT RECEIVE MORE WMEMO FROM THE TREASURY. THE TREASURY WILL ALWAYS HOLD THE WMEMO. However, if you own 1 wMemo and reach the 20% bonus level, then .2 wMemo will be allocated to your wallet from the treasury and you will receive a revenue share that month on the equivalent of 1.2 wMemo (1 + .2 bonus).

So to be clear, the bonus would be the additional revenue share. You would still own 1 wMemo but your revenue share would be based on a total of 1.2 wMemo.

This would have to occur through multiple snapshots throughout the month and you would only be eligible for bonus rewards based on the wMemo you held at the beginning of the month, so if you added to your holdings, you would have to wait until the next 30 day period to be able to receive the bonus on what has been added.

Like I said this could occur to the maximum bonus of 100%, which is feasible because there is a finite amount of wMemo in existence and since the treasury would continue to hold the wMemo, it would not decrease its value.

In order to disincentive, but not prevent or lock anyones wMemo, I also propose that if a wallet sells any wMemo within a 30 day period, then they cannot advance to the next bonus tier. They will not lose their bonus, they simply cannot advance until reaching 30 days of holding without selling.

If a wallet sells more than 5% of their wMemo, then they would automatically get demoted 1 tier. If they sell more than 10% they drop 2 tiers… 15% will drop you 3 tiers… And if a wallet sells 20% or more they lose the bonus and go back to regular revenue share. Over 50% sell and you lose the ability to share in the revenue for that month.

Please note that this only refers to selling your wMemo holdings, anything received as part of the revenue share will have no restrictions on it.

Conclusion
I feel like this is a better use of the wMemo in our treasury than just burning it for a one time bump in market cap. Using the treasuries wMemo for a bonus payment system as I have outlined makes more sense and incentivizes the right kind of behavior regardless of the amount of wMemo you own.

Thank you for taking the time to read this proposal, I hope it leads to a meaningful discussion and hopefully a leads to a future vote and implementation. Let me know what you think, or what suggestions you may have that might improve what I have laid out. Or even any concerns that I may not have mentioned or you feel may have been overlooked. Thank you.

Dude, these are all great idea, and similar to mine, but are they actually going to do it is the question. All this time wasted on nothing. They could have easily done what you suggested. I was a huge supporter of this project but I’ve been majorly let down.

Well all we can really do is try to make this thing better is we’re going to stay invested. As to why we never even got to the point of revenue share, I wish I knew. I think had just the revenue share model that was being spoken of actually been implemented we likely would have avoided all of this.

But we’re here now, and there’s a ton of wMemo in the Treasury from all the buybacks that occurred, so I don’t see why something like this wouldn’t gain some traction.

This is a well thought out proposal and completely worth consideration. I’m sticking around, staying involved to see if this community can salvage the DAO. It would be an incredible case study and come back story if this can be pulled off. A Phoenix…

im all for this plan ive been invested since end of Nov and just been added. never took anything out so this plan lines up with what ive been doing anyway. lets keep the frog nation going!!!

Thanks for reading it and providing feedback. I think we need as many eyes on this as possible. Unfortunately we’re not getting very clear communication from the top, which seems to be miscommunication more than anything but we need to put valid proposals to a vote that will benefit the investors and promote long term growth and sustainability. Feel free to share the link to get this some more exposure.

I don’t fully agree to this proposal for several reasons. Everyone who wants out of the project will still want out. There’s also the APY structure of Wonderland that needs to be addressed. Adding anymore incentives or bonuses on top of this APY structure will only add more to dilution and more sell pressure.

The protocol can always mint like it’s suppose too, so burning tokens is ideal to stop the dilution. Burning is not a permanent fix to the problem, but it creates an alternative for a potential reset. Allowing those who want out of $Time to get out at backing price and burning their tokens will:
a) Reduce dilution and increase value for long time holders.
b) Allow Time to be migrated to a new contract, Wonderland v2, and have a more fresh start.
c) Allow those who doesn’t believe in the project anymore to get out and those who want to stay will be the foundational base of the project.

The discussion to incentivize long term holders shouldn’t be priority at the moment as there are more pressing matters that needs to be addressed.

There is no dilution of wMemo. The tokens are locked and have a finite number. 1750 I believe. The APY doesn’t matter because it has no effect on the actual underlying fiat value of wMemo.

Memo by contrast is an inflationary token. The only purpose of the rebase is to preserve your value in wMemo… So if you purchase 1 wMemo today it would be worth .0164 wMemo… In 2 months you’ll have rebased to X amount of Memo, but still have .0164 wMemo.

People can leave the project whenever they want. The revenue share is coming from the investments and farming that is already being done with the treasury. There is no fixed amount for the actual revenue being shared because that will be fluid based on profits the treasury actually makes. But having a bonus structure in place incentivizes holding so that you qualify for a larger portion of the revenue share, whatever that may be.

looks like Dan has already given up on Wonderland 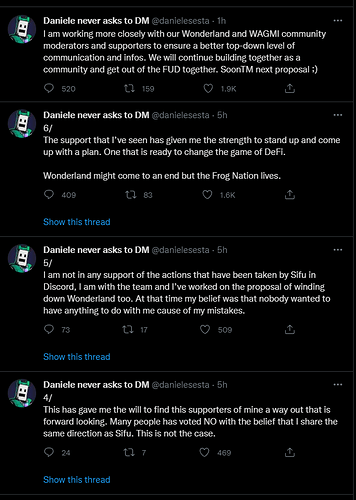 That’s not the case. He’s in the general chat of the Discord right now. I believe it’s more an issue of misunderstanding/miscommunication. Sounds like Dani is still very much with us.

This is directly from his twitter though? Sounds like the situation where he says you wait right here on the sinking ship. “I will be right back” lol

Again I think that’s more an issue of just a miscommunication. From what I gathered in the Discord, we are very much moving forward, but we will give those that want out at backing price the opportunity to do so. I have no issue with that. I don’t even have an issue with rebranding. Just trying to put forth viable options for us moving forward to address some of the shortcomings that we currently have. After this is all said and done I would also like to see this idea of a backing price removed because the market should determine the price, and if revenue share is based on our percentage ownership of the treasury then our revenue share will be unaffected by the actual price of wMemo.

I hope so, as I lost so much and still havent sold anything. I believe we can all achieve great things. But how things are managed needs to change. 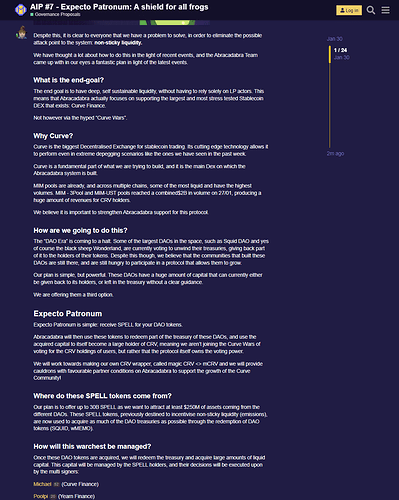 AIP #7 - Expecto Patronum: A shield for all frogs

I know and I agree, it can be confusing and frustrating. I’m down huge too, but I really believe in the vision and I think we’re going to be ok in the end. This has always been a long term investment for me so while the price hurts to look at, I think the market corrects itself if we’re able to show sustainable growth and profits, and I believe we can.

I hope so. I have edited the post above with a link Dan posted within the last hour.

Just read it. Guess this doesn’t matter lol… Well Guess I’ll go along for the ride

Great ideas at least we could make the team read about it.

Yeah, I wish we could get more eyes on it. I feel like the good solutions/proposals are just getting caught up in all the noise.