[OPTION #1] One token to rule them all

ONE TOKEN TO RULE THEM ALL 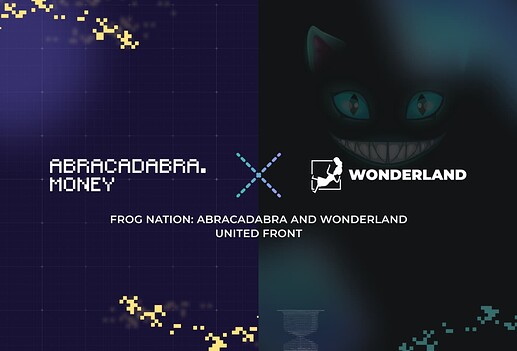 On January 26th, the original merger proposal was submitted for the DAO’s consideration and talked about how the two protocols can work together.

Merging the protocols would allow the DAOs and core teams to focus on a singular path forward by combining all efforts on achieving the protocol’s objective.

Combining resources would make the protocol of giant of the industry. It would allow the potential synergy between both protocols to be streamline under one direction, simplifying the work required to benefit from working together.

The consolidation of the Frog Nation ecosystem could help the protocols become more efficient moving forwards. Daniele has mentioned his vision of corporate/legal structure for the protocol. Working under one roof would reduce the amount of work required in setting those up.

More details around the original merger proposal can be found in WIP 3 and the Medium article below.

During the latest AMAs Daniele has given some hints about what his vision looked like if we were to merge.

One token to rule them all
Daniele has mentioned that he believe the protocol’s would combine under Abracadabra’s SPELL. Using SPELL would allow wMEMO holders to have something similar to the current revenue share by using sSPELL (compound) or mSPELL (pays in MIM).

Branding
Daniele has mentioned that he would like to work with the biggest marketing agencies in the world to help rebrand the protocols. However, it is unclear if we would remain under “Abracadabra” or if the rebranding would include a complete name change.

To finalized a merger, there needs to be terms negotiated and put in place. How much SPELL per wMEMO, how much for the allocations from VC investments already funded by Wonderland, structure of the new protocol, etc.

[THREAD] The vision ... And the future of Wonderland General Discussion

THE VISION … AND THE FUTURE OF WONDERLAND [image] The Vision For months Daniele has been talking about his vision for his protocols. On December 24th, Daniele tweeted a draft of his plan: Sushiswap as the Multichain AMM & DEX (two separate things) Abracadabra will allow liquidity to be deployed across all meaningful pairs cross-chain Popsicle with leverage and tech will allow to execute always at the best price MIM pairs relative to any other market Wonderland will funnel growth and inv…

Keep in mind that none of these options are official proposals, they only serve as getting the discussions started.

Maybe those that voted that they are in favor of this, can explain to me WHY please? This is a terrible idea on many different levels!! Someone who voted YES to merge please tell me what your thoughts are on this!

Merge is not always bad, the huge recourses of all this projects together will be good for marketing and to gather more investors it will make it easier to track the news and updates for 1 big project than many projects.
Also rebranding will help a bit with people to forget the bad history we have.

I think I speak for most of us when I say that the majority of people in this project are under water! Way underwater! IMO, I think Wonderland should stay active until we all have been in it long enough to at least recoup what we lost! Taking community funds and merging this project with ABRA along with the token will NOT MAKE ANYONE FORGET what happened here, and to me, isn’t fair to holders of MEMO/WMEMO. I personally think DANI is moving too fast with EVERYONE’S money and potentially making this more convoluted.
The Earnings on ABRA are nominal in comparison to wonderland… change my mind!

Even if rage quit is offered at backing it will still be no where near what most of us bought in at!

The vision includes 4 entities. Wonderland, Abra, Popsicle, and Sushi… why is the tag “One token to rule them all” used for this when it leaves out half of the protocols in the “vision.” ?

To my understanding one of the biggest benefits of being a wMEMO holder is that we benefit from investments into projects at the Seed Round… would that still happen? If so, would Abracadabra be taking on too much?

If this merger were to happen I’d still want a treasury manager separate from Dani that gets the final say in calling the shots as far as the treasury investments are concerned. We’re getting into the territory where one protocol is doing too many things and that’s shaking me up a bit. Maybe it’s always been this centralized and it’s just now sinking in. Yikes.

What’s the difference between this merger and keeping everything separate but cooperating? A little bit of red tape and some checks and balances? Couldn’t the same vision be achieved?

My understanding is that Dani used the term “one token to rule them all” since the vision here would be to have one massive protocol that does everything.

The four entities were based on the original vison of the Frog Nation Ecosystem, but Sushi is no longer part of that. So there is only 3 entities left.

ICE is still part of it, but until they deploy a successful product, valuation will be bad for them and there isn’t much incentive to acquire them. However, they are still part of the ecosystem and could be acquired later. Realizing the “One token to rule them all” vision.

Dani did say that if we were to merge, there would still be an investment branch and a treasury manager to do things similar like what Wonderland is doing.

Centralization/doing too much is definitely a negative of this option.

I do believe the same vision could be achieved, and from the AMA, it sounded like Dani seems to think so too. Being multiple entities also has negatives like the challenges that come with being more decentralized and having three communities that might be going different ways instead of one common path.

Of course there is no perfect path so it’s important to consider each pros and cons of the different options.

I suppose as long as the merger makes sense to the holders in each. This has been discussed before, but the Wonderland folks seem to be more of a high-risk type, whereas SPELL holders are analyzing the protocol revenue and the sustainability of a lending service.

What SPELL and wMEMO holders will probably want to know before they can really even get into making a decision is this:

Obviously if the price tanks for wMEMO holders, nobody will vote for it even if it means more money LONG TERM value. If for no other reason because of the “unfairness” the SPELL holders could get as a benefit.

IMO that’s what it’ll all boil down to… perceived fairness. And that will depend on the price impact each token has after the merge. Does anybody have enough information to drum up some “mock” numbers to see what that could look like?

The previous merger could be used as an example, but both prices are pretty different from what they were.

I think we need something like that, otherwise the discussion has no grounding in reality. People will need to know “how does this effect me?”

Who can we ask to put something like this together with actual numbers?

Would be Dani. This thread is only to gage the community.

If no one would be interested in a merger, would not be worth the time to figure out a proper deal, but option 2 & 1 seems to be the popular one.

Will have to see what Dani wants to do.

Yea my thought is just that the community isn’t going to have any way to intelligently decide what they want to do if they have absolutely no clue what will happen to the value of their holdings. Just something easy and theoretical. Doesn’t have to be set in stone.

I agree. Option 1 and 2 are going to be the two options the community will likely weigh. But I have a feeling that without numbers, people will lean toward option 2 because of fear of the unknown. I’ve beat that idea to death. Alright I’ll let it go til we get numbers. Thanks @NalX

I think its too early for this, we should focus on stabilizing and making WL again a good investment project!

I agree with this. In order to become a stable organization, we need more than just an investment in a gambling company. The strongest entities have their hands in many, very stable things. It’s been proven in the world that owning the food supply, the schools, the banks, and the transportation makes for a very stable foundation. Then, investing in emerging industries provides for faster growth.

We need both kinds of investments to occur for us to all win, both short- and long-term. Bonding and rebasing was never the answer, that just diluted the pool.

What if we invested in mining farms, and staking pools? Going physical isn’t a bad thing either.

Voice of reason in the sea of pump-and-dumpers. Good luck convincing these guys…

So while I agree with what you are saying, do you mean that merging with Abracadabra gives us this or has more chance to make this happen ? If so, explaining your reasoning would be appreciated.

If it was more of a general comment, then all good haha…

I also think DANI and company are MOVING WAY TOO FAST with EVERYONE’S MONEY! I think wonderland could be a great tool if left as is! I think maybe stop building just to build and focus on the projects that you have to make them great!
DANIS gotten so far ahead of himself of course now from a management perspective he wants to squash them all together!

I believe that is the idea. Convert everything under SPELL.

As for your questions, Dani does talk about that a bit in the AMA, but additional information will definitely be required before we move forward with this.

I guess I was a bit ambiguous with my reply…

IMO, now isn’t the time to make such a merge. I voted No. By keeping the two entities separate, it will help Wonderland keep its focus, and Abra maintain its own.

I’ve always seen Abra more like a bank while Wonderland is more like a Venture Capitalist company. So in traditional world, it makes for an important distinction because your bank, who is in charge of maintaining some consistency, some order, etc. regarding currencies, a VC company is poised to take some privatized risks. Separating them is even a regulatory issue.

Keeping these activities separate will help keep them from negatively affecting each other- the inherent conflicts of interest are quite visible here.