Let’s just start talking about how we can keep wonderland going. I’m tired of this cancel culture when there is a mistake made. I’m a firm believer in second chances. We’ve all had them and nobody is perfect.

If we fold and everyone gets a little piece of the treasury we still lose. Some people will lose much more than others. This helps nobody.

If we can figure out a way to make it work then there is a good possibility we will all profit from this.

I think we can all agree sifu needs to be removed from the treasury. Based on his past the treasury was not a good option him. I’m fine with him still being on the team just not at that level. All about second chances.

If Wonderland continues there has to be a way to lock buys in for a couple months so whales don’t manipulate the market and wreck the small guy like myself. It gives everyone a chance to profit at different intervals.

I also think that if Wonderland continues the faithful holders that did not sell should be reward. Not a lot just a token of appreciation.

Everybody fails in life. When this happens you have two choices. You can fold or figure out a way to be better and not make the same mistakes.

agree wholeheartedly. I’m also tired of investing in losing projects. this was something that was supposed to be a moajor win for everyone. it’s time for that to become the truth and shine through. with the right management it still can be. proper communication and management can pull this thing together. I will happily take this thing over myself and run it 24/7 ALONE and be responsible for it from home if it means keeping it alive…

Disagree Sifu is a Felon. Should not be allowed to participate in this industry. It’s like hiring Bernie Madoff as your CFO fresh out of prison because you believe in second chances? Sifu’s Second chance is working at Starbucks as a Barista vs spending the rest of his life behind bars. Justice served

Agree 100%. Platform/idea too good to be canceled because of this. Bad call on picking fund treasury manager, agreed, and even worse call to try hiding the outcome, sure, BUT we should all still look at the facts here. Where any funds stolen as a result of these calls? No? Has Dani tried to rectify the mistakes made? I absolutely 100% think, yes he has. So does this then mean that the only reason why we should cancel the project comes down to one person who has not been truthful and covered up hes past? Fuk no, imho. Why would we cancel a working project because of this? Fuked up all together, if someone claim this. Every one here complaining about wanting their ”hard earned” PROFITS back are clearly in the wrong investment niche all together. Grow up or fuk off, you knew the risks. No point in whining.

This said, I am 100% in believing this can still succeed. Frogs, unite!

I personally believe the decisions taken by the Wonderland leadership have cost the project and it’s investors dearly, but that their intentions have been correct. I am all but convinced there is nothing sinister going on within the team, as I’ve seen nothing that conclusively indicates the occurrence of fraud or deception. For this reason, and given the resources still owned by the DAO, I believe the only sensible option is to keep Wonderland going, albeit with considerable changes. Even if intentional wrongdoing within the team was revealed, this would only give cause to address the position and responsibilities of those members. The decision to dissolve the treasury should be based on economics and return to investors, and doesn’t need to concern the history or reputation of its management. I see no reason why the fund can not continue to perform, providing a number of issues can be addressed, as follows.

I might be wrong, but it appears to me there has been massive manipulation of TIME and wMEMO, leading to mass liquidations, caused in part by poor communication concerning the buyback process. The promise of treasury buyback is essentially a massive buy wall, and a price target below which is guaranteed profit. Was an attack not foreseeable then? Why was the buyback procedure not in place when the second round of liquidations occurred? This is the only question of concern that I have regarding the Wonderland team as there’s no way to know if internal collusion was involved. The possibility of internal collusion preventing buybacks coordinated with an externally triggered sell-off and liquidation cascade is too serious to ignore. I consider an investigation and a clear statement from the team on this matter to be crucial to maintaining the fund. If this can not be conclusively settled by the Wonderland team, the DAO should seek out a third-party investigation, whether that involves some kind of legal action or what have you.

A decision on whether to remove Sifu as treasury manager will soon be reached through a vote by the DAO. This is already conclusive and Sifu will be removed. A new treasury management structure will need to be adopted and positions filled.

Likewise the management or corporate structure has been inadequate. The crypto market is 24/7 and therefore so the fund’s management team must be also. Liquidations could have been avoided had there been someone on watch (this in fact is an additional internal failure, at best simply bad timing, that contributed to the last round of liquidations, adding weight to the need for transparent communication and a conclusive understanding by the DAO of what happened).

There must be adequate safeguards put in place or otherwise adaptations to the structure of the fund to ensure that attacks or attempts to manipulate the price of TIME/wMEMO can not have the same effect seen lately.

The decision of whether or not to dissolve the fund should be based on promise of return to investors. An estimate of the current value of the fund to investors should be presented along with a prediction or forecast of performance and returns going forward.

In summary, I feel the following items are necessary to achieve support for the continued functioning of Wonderland:

In conclusion, I have concerns which I would want addressed before I casted my vote against treasury dissolution. That said, I have a great deal of confidence in the leadership team behind Wonderland and fully support their statements of intent. I would much rather contribute to the development of the Wonderland DAO and continue to be part of the movement, than cut and run and wonder what might have been.

Unless you are a zionist or some prostitute from down town Tijuana in Mexico that is desperate, VOTE NO! TIME WONDERLAND NEEDS A 2ND CHANCE!

This was well said. You should definitely write a new proposal to vote on. I was just trying to get things started.

[WIP #4] - Wind down Wonderland, and give the treasury back to its holders [WIP] Wonderland Improvement Proposal

Manipulation at is finest. There are like 5 proposals to stop this WIP, can we coordinate to merge all of instead of posting a new proposal each hour? [PNG] 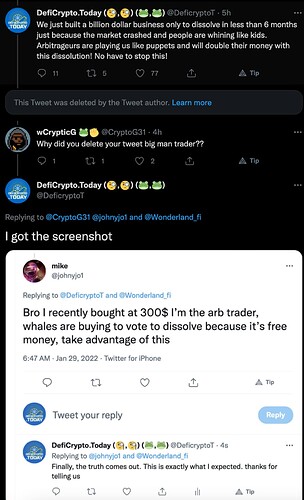 Frogs, please DO NOT vote blindly as many whales bought tokens after the crash, and now they want a bigger piece of the pie. Please please please make sure there is a detailed outline of everything before a any vote is on the ballot.

Here’s the thing, based on the wording and spirit of the current proposal, the exiting Team leadership is basically saying: “We don’t want to do this anymore. The community is going to have to come up with a credible plan for how the community is going to take over”. They don’t say why, we can assume concerns over personal threats and potential legal liabilities are among the reasons but idk what the details are.

So instead of us talking about what they should do, the question become what should we do? If we were to vote not to disband, how would this community go about selecting a new multi-sig team, ensuring everyone is adequately doxed and clean, defining new tokenomics suitable to the operational phase of a VC fund and implementing enterprise grade governance befitting a ~$1B fund? There’s a lot of work to do here. Meanwhile we’re seeing proposals from unrelated teams saying things along the lines of “give us your keys for free and trust us to be honest.” How would we actually decide to do that? I have ideas but what does the community think about executing the practical realities of transitioning into a new leadership team?

Agree. And I would also add that this is not the good time to take a decision like the one which is currently under voting. There’s too much confusion and deciding by gut can potentially be very dangerous. There can be implications that are not easy to figure out in this moment due to all the FUD we went through. We are simply not in the condition to decide, we don’t have all the information we need, we are missing the lucidity which is needed to take a decision like that …

My personal opinion is that it would be better the put the vote on hold, let the storm calm down and, only after that, bring some options to the table.

Last but not least … let the whales to take advantage of the situation would be really disappointing.

Right. Like for starters, we should have a detailed breakdown of exactly how Treasury would even be returned? Can you imagine the gas fees and complexity if they were to try to return all the individual coins in a pro rata share to 100K+ wallets? What do they do instead? Dump them all for MIM and return that? Or dump all the little positions and return just a dozen or so big ones? Idk, this whole thing is being rushed. There’s actually no major crisis here other than a lack of clear thought leadership.

So now that we’ve won the vote to retain our treasury, the work begins to propose how it is to be managed, and assign the multisigs. For multisigs can we employ a commercial legal entity ?

The vote against WIP4 has already passed. What’s needed now is a new proposal from the community on how to take over management of the fund. WIP4 doesn’t state explicitly whether it has to be accepted or not, only that it has to be made. so this is now the focus.