wSifu and Daniele Sesta. I want to take advantage of this space and this opportunity to express myself to propose an idea that I believe many Holders will find fair and worthy. My proposal is that Wonderland recognizes and rewards its biggest believers since from the start who never removed their $TIME invested in Stake. I, for example, invested in October and November, and never removed anything. Those who will join the game now will find prices much lower and won’t go through the adversities and challenges we encounter in this experience. I can’t buy and invest right now, because of my current financial conditions, but I haven’t sold anything I buy in the beginning. I keep believing and holding my initial investment. If I were to invest now, I could buy a lot more wMEMO without having to face anything I went through. So, it seems fair to me to recognize and benefit those who believed and HOLD on until today.

What I requested takes into account those who have been in the initial phase which is completely different from the next phase. It was the rising of money that many believed in and hold despite all the ups and downs of the process.

The way it will be done has not yet been established. It would be studied and thought about how to do this. Perhaps it is due to an increase in participation and therefore, revenue shares.

What do you think of the idea? Do you support or disagree? Add your opinion and help enrich the discussion with arguments and your perspective. 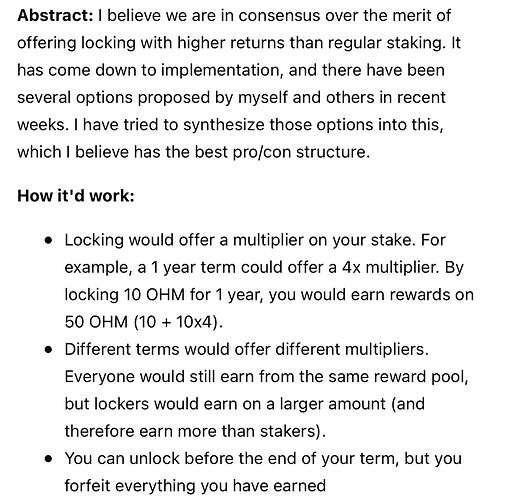 FJXQmOpXIAMuO7x1284×1264 189 KB
[credit to jawz]
I would vote in favour of a variation of something like this. I know sifu doesn’t like locks “no jail for frogs”.
So instead of locking you’re free to claim your acrrued token before the end of term, but you lose the multiplier, not everything you’ve earned.
Those that are in Bancor would know this model.
1 Like
DrunkenMaster January 20, 2022, 4:10pm #4

This is an investment project, not a religion. Wonderland will run into trouble if they discriminate against anyone.

Once the capital of the project can be seen to be working the price will rise and we won’t see so many complaints.