Add Backing per wMEMO to the Wonderland Dashboard

Problem: People see backing per TIME going down on the dashboard and they believe that the Wonderland project is doomed. Everyone keeps on saying that the price of TIME cannot fall below the backing price, but the backing price keeps on falling due to the minting of new time, unnecessarily decreasing frog nation confidence, despite the APY helping greatly to counteract this dilution.

Solution: I propose that a “Backing per wMEMO” value is added to the Wonderland dashboard.

As stated by Daniele Sesta today in a Twitter thread (https://twitter.com/danielesesta/status/1478647683401326596), “there has been confusion about $TIME token price action with the narrative of ‘Is Going Down’ becoming more and more prevalent by fudsters.” and “we decided to take action and shift the focus from $TIME to $wMEMO.”

Adding “Backing per wMEMO” to the Wonderland dashboard would be a natural next step with the Daniele / Sifu / the Wonderland team’s current actions. It would help reduce FUD because the price of wMEMO is by far a better value by which to track the wellbeing of the Wonderland DAO since it takes into account the APY that counteracts dilution, and thus is a more accurate representation of a one’s portfolio.

Although wMEMO is not directly backed, it is linked to a quantity of TIME which is then backed, so it makes sense to be included on the dashboard.

On a side note, it would also make the dashboard symmetrical which is nice. 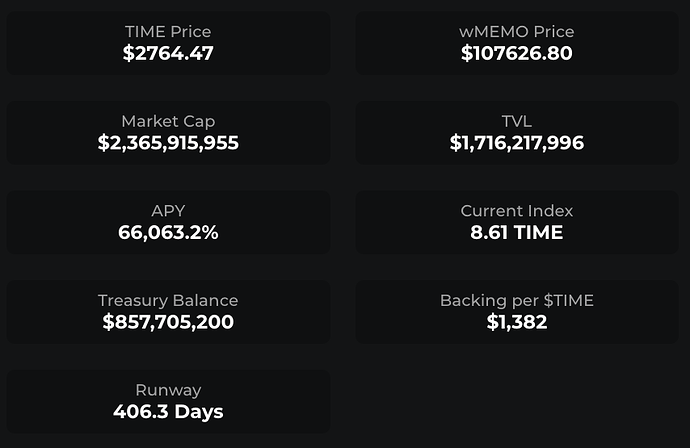